One is given to wonder what or who is responsible when an artist on the rise makes a huge leap forward from one recording to the next, such as we see on Raining In Baltimore from Kim Robins, set for release next week on Pinecastle Records.

Robins’ debut album, 40 Years Late, hit in 2013 and showed great promise from an artist who had been away from performing and recording for many years. But what explains the dramatic improvement on this new project, in her singing, song selection, and overall production quality? It could be working with a label, as Pinecastle has been responsible for many a fine bluegrass record in recent years. Or perhaps it was the production team; Rickey Wasson and Ron Stewart have likewise overseen some top flight releases in their careers.

Or it could just be that four years on the road singing bluegrass have honed Kim’s vision for her music, and refined her perception of what works for her. In any event, Raining In Baltimore is a strong statement that Kim Robins deserves to be taken seriously as a vocalist, songwriter, and bandleader in bluegrass music. 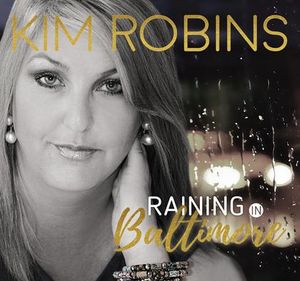 Some of the tracks here will be familiar to folks who have followed bluegrass and country radio for some time. My Baby Thinks He’s A Train was a hit for Rosanne Cash back in 1981, and Kim gives it a funky feel provided by a crack band of Stewart and Wasson, with Adam Steffey on mandolin and Harold Nixon on bass. Blue Yesterdays, an old time country song, was previously recorded by Rarely Herd in 1995. Robins gives it an acoustic country vibe, with a nice twin fiddle intro. Ronnie Bowman inserted Stone Cold Blue into the bluegrass canon on his Starting Over record in 2002, and it’s reprised here with a similar treatment. Fun fact: Ron Stewart played banjo on Ronnie’s cut of it as well.

The album opens with Eye For An Eye, which had been released as the first single back in January when Robins signed with Pinecastle. It’s a spooky-sounding revenge-based killing song, written by Kim Fox, that really sets the tone for the record. Rickey’s daughter, Alicia Wasson, adds a strong harmony vocal, as she does on most of the tracks.

I’ll Be Loving You is a strong, mash-style number from Mike Evans that shows Kim’s voice to good advantage, as does Donna Hughes’ A Dream, a slower, guitar-driven ballad. Heartbreak gets its due on The Love That We’d Once Known, written by Hammertowne’s Dave Carroll, another jaunty, mid-tempo grasser.

Three that Kim wrote are featured on the album. The title track tells the familiar story of someone from the country feeling lost in the big city, far from the one they love. She’s Just Like You warns an ex that they are headed for a heartache with their new love in a fast bluegrass romp, and Bitter Game tells a former lover that she is finally over him. Bluegrass has long been full of songs of this type, and it’s nice to be hearing more of them from the female perspective.

The album ends with Sacred Memories from Dolly Parton, which works a handful of Gospel favorites into the choruses, including Can’t Feel At Home In This World Anymore, If We Never Meet Again This Side Of Heaven, and Power In The Blood.

Raining In Baltimore is a rousing success for Kim Robbins, and should see several tracks other than Eye For An Eye make it on to bluegrass radio. She isn’t possessed of the sort of powerhouse voice that some of her fellow female vocalists boast of, but she knows what suits her style and her abilities, and can muster up the emotion to convey the message in most any type of song.

Pre-orders may be placed from her web site with delivery on July 21.